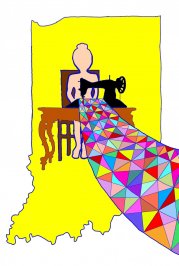 The Indiana Quilt Depot & Machine Service is not exactly a NEW business but an evolution of a long standing business. Our shop originally started as the Bloomington Sewing Center located within the Bloomington JoAnn’s Store. This location was a satellite location to the Columbus Sewing Center and was little more than a kiosk location selling Husqvarna Viking sewing and embroidery machines. As an authorized dealer and service provider for Husqvarna Viking machines, this location was the first exposure most in South Central Indiana had to these high quality domestic machines. While successful, this location was limited not only in physical size but scope of services that could be provided.

In 2007, the Bloomington Sewing Center ceased to exist and re-opened as the Bedford Sewing Center with a storefront located at 1410 J street in Bedford. This move not only allowed the store to expand the scope of services and products, BUT also to better serve the entire South Central Indiana sewing market with a more central location to serve the population south of Bloomington.

Change came again to the Bedford Sewing Center in 2011, in the form of a new owner. Sue Martin, who had been an employee at JoAnn’s. Armed with a passion for sewing and a life-long dream of owning her own fabric shop, Sue purchased the store. The Sewing Center expanded physically twice under Sue’s ownership, eventually occupying the entire building.

Expansion was not just physical space but in staff and services.  In the fall of 2015, Gordon Bell joined the staff as On-Site Repair Technician. Prior to Gordon formally joining the staff, there was a visiting tech on a semi-weekly schedule who often had to take machines off-site for repairs.

Having fulfilled her goal of having owned a fabric shop, 2017 saw Sue looking forward to a full retirement in new year. 2017 also saw the city of Bedford improving the downtown area in the form of the Stonegate Arts & Education Center on the site of the old JC Penny building. Construction activities took over the parking lot and was often closing the street making access to the store extremely difficult. Given the declining sales it was obvious that drastic measures were in order. Gordon found a new location which was agreed would be a more conducive location for continued operation and expansion. So, the purchased of the business was moved up to November and the physical move began.


The new location is south of town, just north of the stop light where US 50 splits to the west from SR 37 it what is locally known as the “Old Bundy Furniture Building”. This location provides numerous advantages over the downtown location not the least of which is over twice the space for expansion, along with better access, parking, and visibility.

Mission Statement:
It is our mission to become the Premier Destination for anyone in the South Central Indiana or Midwest who is interested in purchasing a top quality Sewing/Embroidery Machine, Accessories,  Fabrics, Notions or Instruction in the fabric arts.

It is our Primary Goal to encourage people to discover the fun of all fabric arts (sewing, quilting, machine embroidery, etc.). We will accomplish this by the following:

-      Provide the best quality sewing/embroidery machines and accessories on market to the sewing public of South Central Indiana.

-      Provide the best quality materials, fabrics, and notions to support the sewing public.

-      Providing the best Instruction and Assistance to any and all stitching enthusiasts, no matter their level of experience who wish to learn the time honored skills of thread and fabric.

-      Provide the finest machine repair and maintenance service in the region.

-      Be an Inspiration and Assistance to ALL interested in the fabric arts to reach their full creative potential.